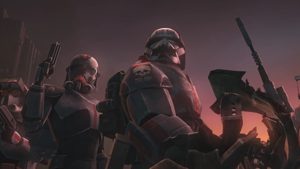 Here's a clip from the Season 7 premiere of Star Wars: The Clone Wars. As the threat of defeat looms, Rex teams up with experimental Clone Force 99, also known as the Bad Batch. Together, they embark on a high-risk mission behind enemy lines to uncover the truth behind the Separatist victories in "The Bad Batch," an all-new episode of Star Wars: The Clone Wars making its debut this Friday, February 21, on Disney+.